The Whitewashing of the Red Light

Quartier Putain is just one of the many examples of how Amsterdam is trying to essentially erase its status as Europe’s Sin City. Recent city initiatives like Project 1012 have shuttered several of its iconic prostitute windows and continue to lead to the closure of several “coffee shops.” De Wallen, the area better known as the Red Light District, is quickly becoming more associated with quirky record shops than weed and sleaze.

There’s even maps available these days that guide tourists to De Wallen’s more family-friendly businesses and away from those that made the district world famous. Residents seem divided when it comes to the changing face of their neighborhood. After years of putting up with poorly behaved visitors, drug addicts and organized crime, many are welcoming the shift with open arms. Others, meanwhile, lament the changes and fret that De Wallen is becoming as gentrified, overpriced and downright banal as a million other districts across Europe.

I visited Quartier Putain a few weeks ago. It’s a great little place smack dab in the heart of the Red Light; just across the street from the Oude Kerk. Their coffee is great, the atmosphere is great and their jukebox is, you guessed it, great. Still, I’m conflicted when it comes to supporting the business. Should I frequent a place that, for better or worse, is contributing to the whitewashing of one of the world’s most notorious locales?

Have a look at the photo above. Just beyond the right side of the frame, a few feet from the gentleman with the cane, there’s a row of Red Light windows. When I arrived, a group of 20-somethings were sitting at the tables outside staring at their iPhones while ignoring the ladies nearby (who were also killing time between customers by looking at their own smartphones).

It was a scene that perfectly encapsulated what’s happening with the district. Alas, I didn’t think to take a photo until it was too late.

The times they are a-changin’. And fast.

I ventured across the border to Antwerp a few weeks ago to see Arcade Fire play a show at the Sportpaleis. Despite some sound problems at the beginning of the set, it was all sorts of wonderful.

As the band left the stage to prpageep for their encore, a group of actors in giant paper mache masks kept the crowd entertained by dancing to a song that I thought was pretty obscure. I’d only heard it in National Lampoon’s European Vacation. In the film, Chevy Chase and his brood race through the Louvre while the song blasts over the soundtrack.

The title? “Ca Plane Pour Moi.” It was recorded by a Belgian New Wave rocker named Plastic Bertrand back in 1977. Here’s an informative excerpt from the song’s Wikipedia page:

On the other side of the Atlantic, “Ça plane pour moi” entered the Billboard Hot 100, a feat for a French speaking song because only “Dominique” by the Belgian singer The Singing Nun and “Je t’aime… moi non plus” by French singers Serge Gainsbourg and Jane Birkin had achieved such performance in the United States before this time.[9] “Je t’aime… moi non plus” had peaked at no. 58 on the Billboard Hot 100. “Ça plane pour moi” eventually reached no. 47.[18] It also peaked at no. 58 in Canada. “Ça plane pour moi” has sold over 900,000 copies around the world and is regarded as a “punk-new wave-pop classic”

Yarp. I should have probably known that the song was a huge hit over here back in the day. The crowd went nuts for it and sang along. Two weeks later, I still find this totally amusing for some reason. Here’s a video of the spectacle, along with the first song from Arcade Fire’s encore….

Back in the early ’80s, Tim Burton directed a short adaptation of Hansel and Gretel for The Disney Channel. It was considered so weird and disturbing that it aired only once; late on Halloween night in 1983, or so the story goes. The film was considered lost until a few years ago, I guess, and it hasn’t been publicly available online….until now. I watched it for the first time last night.

The first ten minutes are rather tedious but things get really freaky once the kids reach the Gingerbread House. If you were a child watching public television in hell back in the ’80s, this is probably what was on all the time. Picture Mister Rogers’ “Neighborhood of Make Believe” drenched in German expressionism and complete indifference to fragile psyches of viewers under the age of 10. The film is Burton at his most Burton-y and the creepy imagery rivals Beetlejuice‘s darker moments. I don’t want to oversell it but there’s a goodly amount of nightmare fuel packed into its relatively brief running time.

It’s amazing that this crazy thing was ever aired on TV in the first place (and that Burton somehow went on to be an incredibly successful movie director). I’m pretty sure the guy must have made a deal with the devil right around the time he was hired to direct Pee Wee’s Big Adventure.

You can watch the whole thing on YouTube. Here you go…

Nothing more, nothing less… 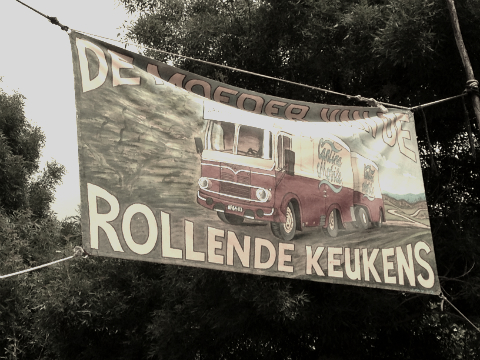 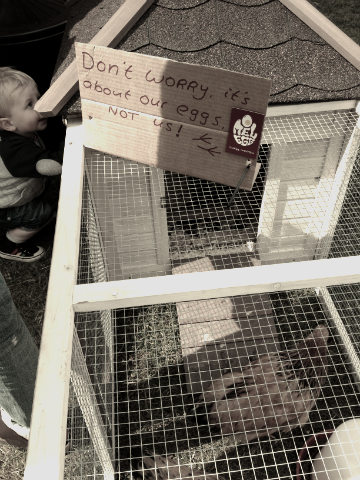 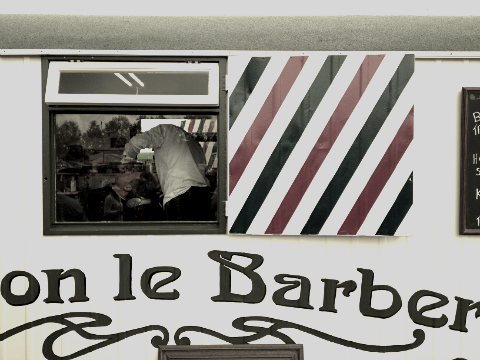 Premature Requiem for a Taco Shop

I’m sad to say that I may have had my last Super Burrito ever last night at The Taco Shop in Amsterdam. The owner hails from Colorado and has decided that it’s time to move home after 14 years in Europe. He’s hoping to sell the operation to someone willing to carry the torch but there haven’t been any takers, as of yet.

Not only does The Taco Shop offer the best Mexican food in the country (colossal/tasty tacos and burritos at downright reasonable prices), the walls are covered in bumper stickers and old concert posters. The place looks like it was airlifted into Amsterdam from some random small town in California. 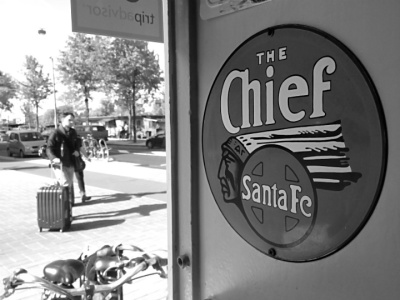 Weirdly enough, there’s also a Cannon Beach sticker on the front door. I was born and raised in Oregon and have spent many a summer day on the shores of Cannon Beach, OR. It’s pretty weird to see any mention of it all the way over here.

The Taco Shop an oasis in this country’s wasteland of “meh” or overpriced Mexi-offerings. I will miss this place terribly if it goes the way of the dodo.

Showgirls is a serious drama!

This morning, one of the Dutch channels was airing a chat with John Wilson, the founder of the Golden Raspberry Awards. The interviewer decided to grill him about Showgirls, the super-campy film directed by Netherlands native Paul Verhoeven.

The interview couldn’t figure out why Wilson and his crew gave the movie the 1996 award for Worst Film of the Year. An excerpt from their conversation (not verbatim).

INTERVIEWER: “In my country, we understood that Showgirls was a serious satire all about Las Vegas, Hollywood and the sex industry…”

WILSON: “Really? With all those boobs and bad dialog flying around at a million miles a second?”

INTERVIEWER: “Yes. A lot of Dutch people thought that you Americans just didn’t get what Verhoeven was trying to accomplish.”

Then the editors cheekily cut to a clip of Verhoeven accepting the award with good humor. Did Dutch audiences really take that movie seriously back in the ’90s? Sure, there’s plenty of satire in there but it’s shrouded by some of the most ridiculous dialog and acting ever seen in a major Hollywood film.

Attention Vampire Fans and Appreciators of Overdressed Ghouls in General!

Are you tired of what passes quality vampiric entertainment lately?

Do the tedious antics of the Twilight twits make you want to drive a stake through their heads?

Then I’ve got the movie for you. It’s headed to the US in April.

OK, the title is pretty dang pretentious but bear with me here. It’s called Only Lovers Left Alive and, not only is it a damn good vampire flick, it’s one of celebrated director Jim Jarmusch’s best films. It stars Tom “Loki from Those Thor Movies” Hiddleston and Tilda Swinton as two vamps that have been together for centuries.

It’s the sort of tale I’ve been wanting to come across for years and it elegantly explains how much of a flippin’ drag it would be immortal. Centuries of living have rendered Hiddleston’s character as world weary as it gets. They’re the most intelligent couple on the planet and there’s broad hints throughout the film that vampires are secretly responsible for everything from the works of Shakespeare to the inventions of Tesla. What do you do when you’re the smartest creatures alive but you’re beholden to repetitious mistakes of history and can’t do squat about it?

Hiddelston, who is holed up in a rotting house in an abandoned neighborhood, spends much of film muttering about how stupid humans are when he isn’t buzzing around the streets of Detroit in a vintage sports car fueled by Tesla tech. These scenes, which include hypnotic shots of the ravages of the Motor City, are flippin’ gorgeous.

Like much of Jarmusch’s movies, not much happens but the dialog and performance are all great and I dare say there’s more plot and thought in its 122 minutes than the entirety of those god awful Twilight movies. The soundtrack is killer too and John Hurt shows up as an undead Christopher Marlowe that’s still pissed that Billy Shakes got all the credit for the plays he penned. It might be too languid for most viewers and it’s goofy n’ pompous (what vampire movie isn’t?) but I loved the hell out of it. In a perfect world, this the movie all the world’s goth tweens would pour over.