Trans-Europe Express: A Tour of the Netherlands’ Best Food Carts

At last count, over 500 food carts can be found within the borders of my hometown of Portland, OR. When I was still living there, I made routine trips to ones like Big-Ass Sandwich, Koi Fusion, Bangkok Duck and Chicken, The Grilled Cheese Grill, the carts along Mississippi Avenue and Potato Champion. I’ll never forget the owner of a cart located in a “pod” along SW 3rd Avenue who had the gumption of serving reindeer sausages during the 2010 Christmas season. These places offer up some of the most intriguing and daring culinary delights in the city and they’ve received plenty of national press attention as a result. There’s also a local blog, Food Carts Portland, devoted to reviewing them and keeping their customers updated about openings, closures, etc.

One of the biggest drags of living in the Netherlands is that food carts are few and far between. Despite a scattering of hot dog carts here and there, and oliebollen stands during the holidays, they’re hard to come by. So I was skeptical when I read that Amsterdam was hosting a food cart festival this weekend. I pictured a small circle of carts, all serving hot dogs or egg rolls. What could the Dutch do that would possibly top the places I frequented back in the “Food Cart Capital of the United States”?

Plenty, I’m happy to report. The cooks that turned out for  Het Weekend van de Rollende Keukens (“The Weekend of Rolling Kitchens” in English), now in its fifth year, all brought their A-game. Many of them were eager to distort conventional concepts of what can, and cannot, be done with carts. Instead of a paltry half-dozen trailers sitting in a parking lot, as I imagined, the event packed dozens of carts, trucks, trailers, bakfiets and other structures in a large field at the Westergasfabriek. The design work on many of them was downright outstanding, closer to something you’d see at Burning Man than a street corner.

A cart serving coffee was shaped like an old tug boat. A tiki bar was littered with strange sculptures and a patio area littered with interconnected old radios all blasting Les Baxter.  A cart called the Bar d’Asperge regaled customers with a DJ spinning records from a booth attached to the roof.  A sushi cart built out of an old fire truck featured both an HDTV screen behind the cook and two mobile sushi trains.

The most interesting cart, from an architectural standpoint, was Sangria, a place that served pannekoeken and cocktails next to a retrofitted Ferris Wheel with modified buggies equipped with tables, each with its own bottle of syrup.  Elsewhere, two cooks running the Cafe de Gillende Keukenprins offered diners a five-course meal in less than 10 minutes. They entertained their customers and passersby with a strange piano/stove/sink (see the video below) and a series of quips and flying plates.

Where had all of these carts come from? I spoke with the owner of Zwart Goud (“Black Gold,” AKA the coffee cart/tugboat), who explained that many of them only turn out for music festivals and events like this one.  Because of the weather and other factors, carts can seldom be found on street corners in the Netherlands ala Portland.

But, all these gimmicks aside, how was the food? Pretty dang great, if I do say so myself. A cute cart called Miss Potato was serving chip-style fries on a stick with a variety of different spices. I opted for Cajun.  A cart built out of a bakfiets dished-up Japanese-style poffertjes, which are typically small pancakes covered in powdered sugar. This variation ditched the sugar for squid, veggies and seaweed. Delicious! While touring the grounds, I also tried a goat cheese crepe with honey and figs, tandoori chicken, red lentil soup, a Cuba Libre and a “My Little Pony” burger made out of real pony meat.

Allow me to explain that last one. While wandering the grounds, I noticed a peculiar sign with a goose drawing that my girlfriend translated. Keuken van het Ongewenst Dier (“The Kitchen of Unwanted Animals”) it read. A passing Russian guy overheard us and mentioned that they were also serving pony burgers. “It come from a, how do you say, petting zoo,” he said. “It broke leg so they took gun and shot it in head. BANG! Just like that. Now they make use of meat rather than destroy” I think he was trying to shock us but my face lit up instead. Given my unquenchable appetite for weird foods, I had to try one. 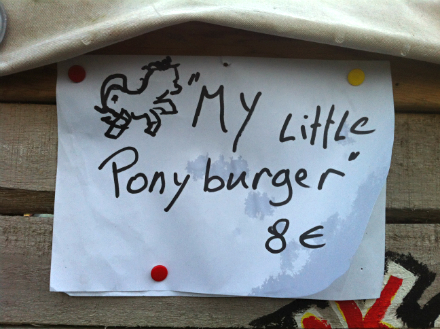 The friendly guy running the grill elaborated on the concept of his peculiar business. It makes use of the meat from unwanted Dutch animals like the geese that live around Schiphol Airport. They’re often hunted to prevent them from flying into the paths of planes taking off and landing. Rather than toss out the geese, the KOD makes use of them and other critters like the pony they were serving at the festival. FYI, the pony in question was someone’s pet (not a veteran of a petting zoo), that had to be put down due to old age and a broken limb.

While my girlfriend rolled her eyes, I dug in. The burger was worthy of its namesake; best described with adjectives like “magical.” The patty was tender, juicy and nicely complemented by a slice of white cheese. Despite being a bit gamy, the burger was rather delicious. Would I ever eat pony meat again? Absolutely. Feel free to call me an “inhumane monster” in the comments section below, if you like.

All in all, the festival was a great surprise and a fun way to spend a Friday night. Now if only places like Zwart Goud would set up shop down here in Leiden…

More photos from the fest:

This entry was posted in ani-pals, coffee, Europe, food, video, weird. Bookmark the permalink.
%d bloggers like this: