Why You Should Never Order a Black & Tan in Ireland

On the rugged western coastline of Ireland there lies the village of Portmagee. This small community consists of a small, main drag lined with pubs and shops along with a scattering of houses down some side streets. It also serves as a launching point for voyages to “Skellig Michael,” a rocky island that bears the sixth-century ruins of a monastic settlement. Portmagee was named for the infamous Captain Theobald Magee, a smuggler who exploited the complicated waters on the southwestern Irish coast to smuggle everything from whiskey to tea and textiles and had enough cheeky spunk left over from his business dealings to marry the county’s MP.

It’s also a place where you should NEVER, EVER order a Black & Tan.

While on a road trip through the Emerald Isle last spring, I made this mistake. To date, it’s the biggest faux-pas of my life.

While spending the night in Portmagee, Marie and I rolled into one of the village’s pubs for dinner. After eating some stew and washing it down with an imperial pint of lager, my gut demanded more beer. I mosied up to the bar and perused the menu written on a chalkboard next to an old bell, presumably used as a noisy weapon to chase away stragglers at closing time. I was craving a Black & Tan, a delicious combination of English ale and Irish stout.

The fact that I didn’t see one listed on the chalkboard wasn’t enough to deter me. I didn’t think for a second that there might be some sort of history behind this tasty beverage.  Just about any bartender in America will make one of these for you without batting an eye.

Before I could spew the words “could I get a Black and Tan, please” out of my naive American mouth, the demeanor of the cheerful barmaid behind the counter went from “mild amusement” to “barely suppressed rage” in 1/4 of a second. I could see fireballs, literal fireballs, developing behind her irises. I was about to receive the beating of my life. Confused, my eyes darted over to the punter sitting at the end of the bar, who had spent the evening irritating the hell out any female staffer unlucky enough to come within ten feet of him by unabashedly telling them raunchy jokes and making  sloppy passes.

The punter turned and gave me a look that seemed to say, in no uncertain terms, “You have just done something absolutely terrible, worse than anything I have ever done in this place, including a night when I got impossibly drunk on rot gut whiskey and tried to passionately kiss the woman you’re currently speaking with. I slipped and my face fell right in the middle of her quite ample bosom. Then I threw up all over her. She was mighty angry that night and kicked me in several places on my rickety, timeworn body . I limped for three months, son, and I still have many a scar from the night. That’s what she did to me, a man who is relatively harmless, over 70 years old and a regular patron. My alcoholism has helped put her children through college. What do you think she’s going to do to you, a stupid-as-hell American in possession of limited knowledge of either  ‘The Troubles’ or this county’s dark and bloody recent history? To use a Canadian term I once heard, lad, you are totally, and completely, hosed. Moron.” 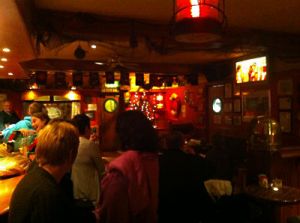 Somehow, this very offended barmaid managed to not call up some of her burly colleagues down at the docks to throttle me within an inch of my life. Instead, through her teeth she said, “We don’t serve those here.” Being someone who is almost always aloof, especially when I already have 20 ounces of premium Irish ale in my stomach, I ordered a Murphy’s, not quite processing what had just happened.

You see, Black & Tans serve as an obvious metaphor for the bitterness that still simmers between Ireland and the United Kingdom. When poured together, the two beers refuse to mix, with the stout floating on top of the ale. “Black and Tan” was also a derogatory term for members of the Royal Irish Constabulary Reserve Force and other English brigades during the height of “The Troubles.” Members of these units, who dressed in black and khaki colored uniforms, were shipped to the Emerald Isle to help suppress Irish rebels in the 1918. They quickly earned a nasty reputation for their vicious brutality and relentless tactics. God knows what horrible things they had done to many members of the barmaids’ family.

Still gleefully oblivious to what I had just done, I returned to our table. We spent the next hour watching a group of locals as they gathered around the pub’s TV. A local secondary school had hosted a pirate-themed talent show in honor of Captain Magee over the weekend. They were all there to watch footage one of the faculty had captured. The small crowd laughed like hyenas as the kids performed a cover of “Yellow Submarine,” complete with a pretty elaborate cardboard prop.

So, yeah, it was a pretty memorable night, all around. I recall chatting with a few of them about the show.  Then, about 72 hours later, Ben, a colleague from college who currently lives in Dublin, told me all about my grievous error over beers at an ancient joint nestled somewhere in Temple Bar. “You’re lucky you made it out of there with your head,” he told me.

In hindsight, I should count my lucky stars that we hadn’t ventured into another of Portmagee’s pubs. I poked my head in one filled with a bunch of pretty damn drunk guys who seemed incapable of getting through a sentence without including at least four “fook”s.  I don’t think they would have taken as kindly to my ignorance or would have been able to restrain themselves from sending me to an early grave.