The Furry Fortunetellers of Istanbul

Culture shock is something that most people avoid like the plague. I thrive on it. The weirder, the better. I’ve participated in plenty of bizarre local customs over the years but consulting a rabbit about my future is definitely one of the stranger ones.

Take a walk through the historic center of Istanbul and amid the minarets, hookah bars and ice cream stands you’re bound to spot one of them- mustached peddlers standing on street corners, beckoning tourists. Beside them, a small stand with two or three rabbits. On a sweltering night one September, I was walking back from dinner with Marie when one of these guys jumped up and thrust a bunny towards me.

He spoke in broken English and I immediately assumed that he was trying to sell me one. A quick Google search back at our hostel revealed that, no, he was instead trying to extol the virtues of his pets’ amazing abilities to predict the future. I came across this pretty fantastic essay on McSweeny’s about the whole thing. I don’t know the local term for these guys (if you do, definitely drop me a line) but there’s plenty of blog posts littered across the internet written by foreign tourists describing their encounters with “rabbit fortunetellers.” Sometimes they also use roosters.

Immediately fascinated with the idea of allowing a fuzzy bunny to consult the cosmos about my prospects, I kept an eye out for them throughout the rest of our trip. That same peddler and his rabbits were back in business a few nights later. “They tell your future, yes,” he told us. “Only 10 Lire!” I quickly broke out a few bills and they got to work. 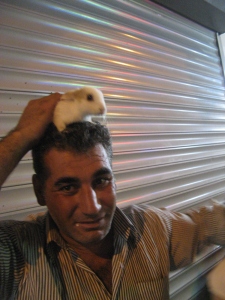 He picked a large, white rabbit off the stand and held it over a wooden case filled with multi-colored paper fortunes. After he pinched its neck, the bunny opened his mouth, picked out one and dropped it my hand. Then they repeated the process. It should go without saying that PETA probably wouldn’t approve of any of this.

By the time I had my two fortunes, a group of British tourists had joined us. Surveying the scene like one might a car accident and completely unable to look away, they made a few sarcastic quips about me being a sucker but I ignored them. They too wanted to indulge in this strange bit of Turkish hucksterism and took out their cameras for photos. They just didn’t want to pay for the experience. A better writer might, at this point, insert a poignant analysis of the socio-economic realities of life and tourism in Istanbul (and how obnoxious and patronizing citizens of the UK can be when they’re travelling abroad and have a few beers in them) but I’d rather break out a short digression about bunnies.

The dude and his rabbits were both totally charming and exceptional street salesmen. Marie bit the bullet and had her fortune told too. Afterward, we took turns posing with them for a few snapshots before heading off in search of a quiet spot to get a drink.

One of the fortunes is still sitting on my desk back in the states. I have no idea what happened to the other one.