New Year’s Eve is a big deal here in the Netherlands. I don’t think it’s a stretch to describe the holiday as the Dutch-equivalent of the Fourth of July. Every year, fireworks officially go on sale a few days before the 31st. The night of, at the stroke of midnight, the entire nation takes to the streets to light off their caches. Some of their stuff is even legal (but a lot of it, not so much).

I spent NYE 2011 in Amsterdam and the city looked like World War 2 all over again. At midnight, I stood, canal-side, as some mad bugger on a houseboat regaled a crowd of hundreds with an all-out assault of rockets and mortar shells. This was on the heels of attending a house party where the host rigged a series of fireworks on a makeshift, plywood balcony to a 19th-century TNT plunger. Where he found such a thing, I have no idea.

I still consider it something of a miracle that I made it back to my apartment unscathed. Every year, Dutch authorities confiscate several million bucks worth of explosives from the locals. In 2010, firework sales in the Netherlands topped out at around 65 millions Euros.

Along with trips to oliebollen stands, another common sight around here this time of year are postcards. Boomerang Postcard racks can be found in restaurants and bars all over the country. Some people find them obnoxious or explicit. Others (like me) consider them cheeky and cool.  Their annual New Years Eve line typically starts appearing in mid-December. I’ve spotted about eight different ones over the past few weeks. Here’s a few of the more interesting postcards… 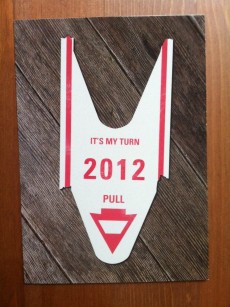 This entry was posted in Europe, holidays, Holland. Bookmark the permalink.