I’m semi-nude and a Turkish guy, also semi-nude and who strongly resembles my middle-school art teacher, is poking me in the stomach. He reaches for a cloth mitt as rough as a cat’s tongue and begins scrubbing my neck.

This is not the sort of thing I had daydreamed about back in my cubicle drone days in Oregon, when I’d stare out the windows of my office and wish I could flee all the tedium and escape to Europe. I was on the fourth day of a trip to Istanbul and this was only the latest bit of culture shock the city had dished out. After being woken up by early-morning calls to prayer, smoking hookahs and haggling with merchants at the Grand Bazaar, a trip to a traditional hamam dating back to the Ottoman Empire seemed like a practical move.

The historical Cagaloglu baths are on the list of “The 1,000 Places to See Before You Die” and celebs like Cameron Diaz, Harrison Ford and Chevy Chase have all visited the place. Michael Palin filmed a BBC segment there sometime in the ’80s. While the “treatments” offered by its muscle-bound staff are hardly what could be described as relaxing (for me, at least), the tradition dates back hundreds of years and the locals swear by them. Plus, if the experience is good enough for Clark W. Griswold and Indiana Jones, how could I refuse? 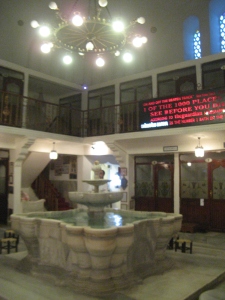 On a quiet Monday afternoon, my girlfriend “M” and I stepped across the hamam’s threshold and each signed-up for a bath and a massage. Divided into separate areas for men and women (back in the day, males who dared venture into the other side were supposedly executed),  Cagaloglu  is a masterpiece of Turkish architecture and the last of its kind to be built in Istanbul. The elaborate lobby includes a large fountain and changing rooms for men.

After bidding M adieu, I changed into a towel and a pair of wooden sandals. “Adem,” my attendant for the afternoon, led me into “The Hararet,” an elaborate sauna that looks like the interior of a stripped-down palace. He pointed me towards a large, marble slab in the middle of the room and told he’d be back in fifteen minutes after I had adjusted to the heat.

I was all by myself in the sauna so I decided to lay on the slab like a slug and gaze up at the stone dome overhead. Having been born and raised in the Pacific Northwest, I’m a total wuss when it comes to humidity. I immediately started dripping sweat. By the time Adem returned, I had lost roughly 15% of my total water weight.

A series of marble baths and faucets line the perimeter. After a massage on the slab, I followed him over to one. By this time, other guests had arrived, including an enormous, walrus-shaped bloke who looked like a combination of Saddam Hussein and Jabba the Hutt.

Adem dumped an iron tub of water over my head and began furiously scrubbing my back, letting out an occasional moan that sounded like Billy Dee Williams getting his “swerve on.” More than a bit homoerotic? Maybe, but not quite when you consider the fact that he kept pointing out all the dead skin he was scrapping off my body. Also: during all of this, the Saddam walrus was getting a massage on the other side of the room and was emitting noises that sounded like Newt Gingrich getting skinned alive. They bounced off the stone interior like gelatinous Super Balls. Hardly a moment worthy of that scene in Top Gun. You know the one I’m talking about.

After all of this, Adem suggested that I continue soaking up the heat for as long as I liked or that I might enjoy spending some time in the sauna’s  super-hot side chamber. He advised me to fill the tub with cold water and dump it on my head if I started feeling woozy.

I lasted all of another ten minutes before I ducked out. Adem tossed me a fresh set of towels and stopped me as I headed back towards the changing rooms. In a series of swift movements, he made a headscarf out of another towel and tossed it on my head. “ALI BABA,” he chuckled. Not sure of what else to say, I thanked him and went off in search of my pants. 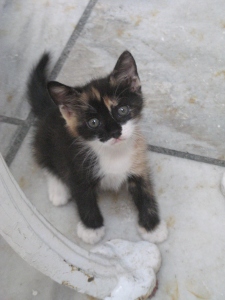 I got dressed and took a seat in Cagaloglu’s courtyard, figuring M would be along shortly. I drank some orange juice while a group of kittens bounced all over the place. The hamam’s cat had delivered a litter a few months prior and her offspring were determined to pose for as many photos as my camera could handle. 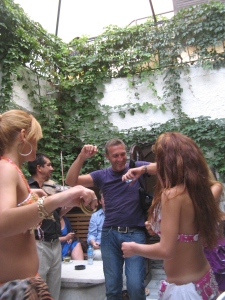 About a half-hour later, I was joined by a group of English tourists, a band and two belly-dancers. One guy, who looked sort of like Daniel Craig after one too many martinis, jumped up to dance with them and trade hip bumps.

M wandered out, totally refreshed, about an hour later. Her experience on the women’s side of the hamam had been much more chill than mine. As weird as the afternoon had proven, there was no denying that I had never been cleaner in my entire life.