When the Goths Have Their Picnic…. 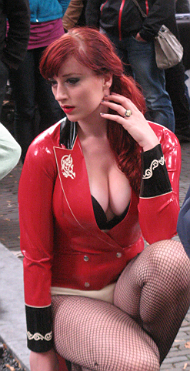 Back in July, I found myself at a goth convention in Utrecht.

It’s not often that I find myself at goth conventions. This closest thing I’ve come to is Bats Day at Disneyland back in the ’90s and that was by happenstance. My sister and I were wandering through Fantasyland when we discovered a few dozen people who looked like extras from a Tim Burton fever dream having their photo taken in front of Sleeping Beauty Castle. Goths from all over Orange County and elsewhere invade the park once every year to freak out the norms while shielding their delicate, pale skin from Southern California’s abundant UV rays.

Needless to say, they don’t have to worry about the sun around these parts, especially considering that we’re in the middle of the rainiest summer on record. The weather for this year’s edition of Summer Darkness was perfect. Murky skies but little dampness (never a good thing for the undead, right?). “M” and I had come to town to climb Dom Tower, catch a screening of Nosferatu and…gawk at the goths, natch.

As we climbed the tower, we could hear them down below…mingling. What do Dutch goths making merry sound like? A 13th century wake. The sound of murmuring and mournful violins drifted up the tower like smoke from an opium pipe, providing a stark contrast to all the tourists chittering and taking photos of everything in sight.  On the way back down a tiny, stone stairwell, a kid ahead of us decided to make a game of sticking his head in every single window he passed. “Nope, it won’t fit in that one,” he chuckled. “Nope, it won’t fit in that one either!” Undaunted, he continued his scientific pursuits for ten minutes, eager to prove his hypothesis, if only once. Finally, his dad, who had thought all of this was incredibly charming and hilarious, pulled him aside and let us pass.

The goths had set up a stage in a church courtyard. For every one of them, there seemed to be three photographers. One girl, covered in makeup and a skin-tight latex ensemble, put on her best “the world bores me and you mortals are pathetic” face as flashbulbs went off all around her. Then she abrubtly stood up as a colleague approached and began rubbing her appendages as if she were a veal calf. It was a strange sight but the outfit was probably cutting off blood-flow to every part of her body.

Steampunk seems to be a big part of goth culture here in the lowlands. Many of the guys in attendance were wearing 19th century brass goggles or top hats with old clocks installed in the side. Florescent dreadlocks were big among their female counterparts, making them look halfway between Strawberry Shortcake and the aliens from Battlefield Earth. Coffin-shaped backpacks were a bit hit among the younger set. After the violinists departed, it was time for an annual fashion show, presenting us with a further array of goth subcultures. At one point, a girl came out dressed in pastels and threw candy into the crowd to the thumping beats of Lady Gaga’s “Born This Way.”

The Nosferatu  screening was held in an old church and an organist provided live accompaniment. The non-goths in the audience, who seemed to all be movie nerds jonesing on this rare opportunity to see the scariest vampire movie ever made on the big screen, were much more into it. A rail-thin gent in a Victorian tuxedo was the first among them to sneak out halfway through the film.