Believe it or not, this is a line from The Smurfs, the universally reviled cinematic rehash of the beloved ’80s cartoon show and Belgian comic strip. I found myself getting sucked into the tractor beam of the film’s marketing last month when these posters started popping up around the Netherlands. 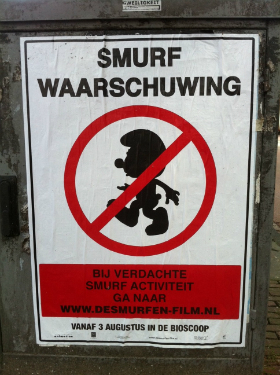 Now I knew The Smurfs was terrible. Every critic in the known universe tried to warn me away from the film but this didn’t quell my curiosity. How bad could it really be? I had to know. Seeing The Smurfs had become a challenge, an endurance test.  I decided I’d live tweet the movie as I watched a cam copy I found on The Pirate Bay. After all, it’s not like the producers needed my Euros. As we speak, those little blue socialists are raking in the dough and  a sequel has already been green-lit. Or, in this case, should that be *blue* lit?

I put on the film last night at the stroke of nine and started tweeting. Some of my Twitter followers rooted me on while others recoiled in horror and blocked my account. Here, for the sake of posterity, is a recap. How far did I make it into The Smurfs? How many followers did I lose in the ensuing melee? Read on to find out….